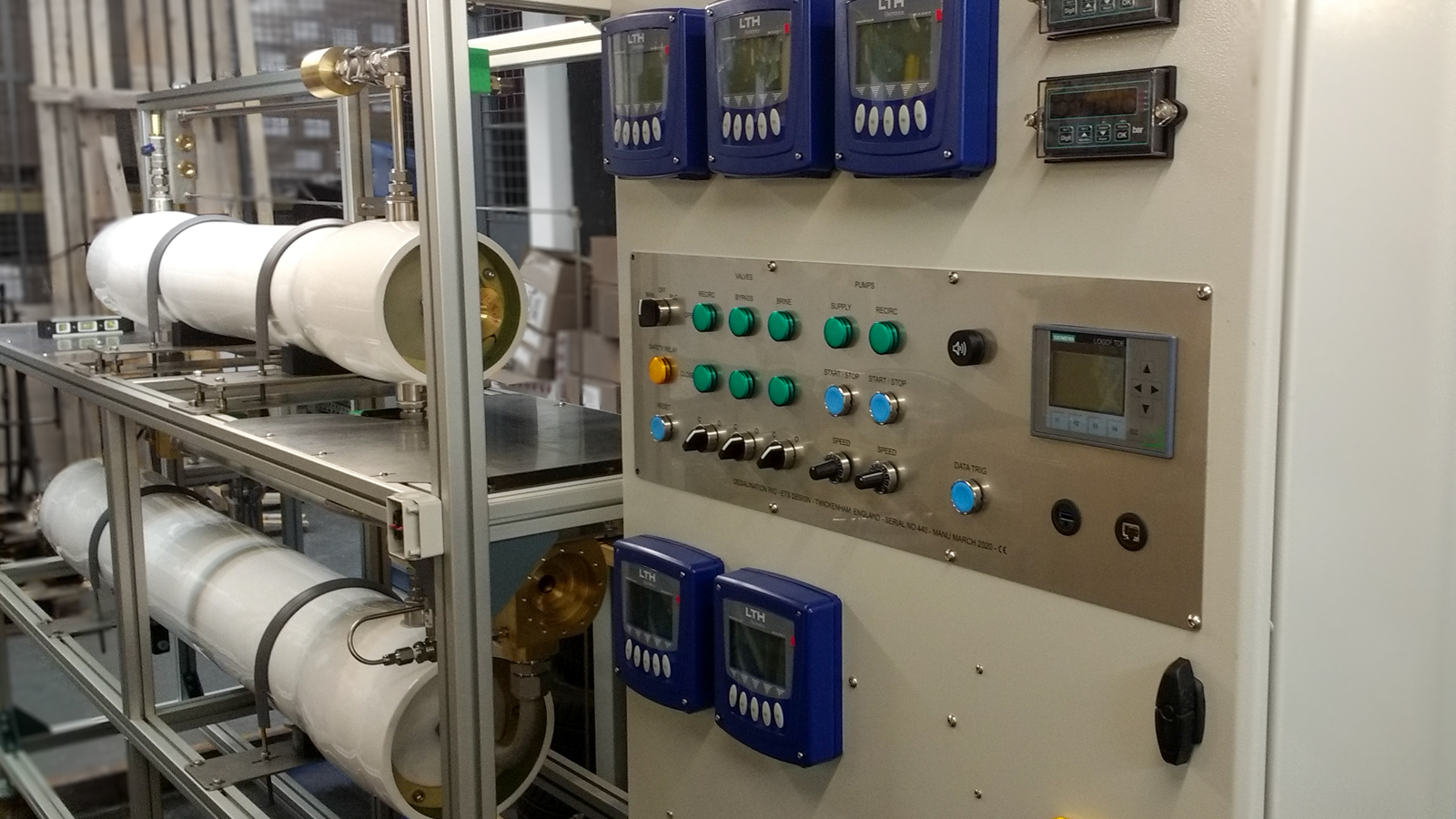 To aid the University in the development of its desalination systems, ETS provided an experimental system for use within the university laboratory. The system was developed with the university and this work included  developing the specification to ensure that all the data required for analysis was captured.

The final system included multiple sensors measuring conductivity, flow, and pressure, temperature, and power consumption. These sensor outputs are used as control inputs as well as being logged for data analysis.

The system required a consistent and high flow rate, to achieve this ETS designed a bespoke magnetically couple recirculation pump and a set of special manifolds which interface with several standard components which had differing connection types and sizes.

The desalination components, control box, and panel were all mounted on a large framework with a 3.65 x 0.8 metre footprint and measuring just under 2 metres high. A 1000 litre tank and pump were also provided as well as connections to and from the tank and pump.

Control of the system is through a dedicated PLC. The program was developed with the university and designed to be modified by the Ph.D. students and researchers without compromising the quality of the data captured or the safety of the system.

As well as a PLC-based control program the rig also has a fully manual control mode. This mode can be used for running and tests and for diagnosis work on the system and allows the students and to run tests without the need to modify the PLC program.

ETS continues to work with the University to provide upgrades to the rig so that testing can continue to expand.

Partner with us and make your ideas happen

This website uses cookies to improve your experience while you navigate through the website. Out of these, the cookies that are categorized as necessary are stored on your browser as they are essential for the working of basic functionalities of the website. We also use third-party cookies that help us analyze and understand how you use this website. These cookies will be stored in your browser only with your consent. You also have the option to opt-out of these cookies. But opting out of some of these cookies may affect your browsing experience.
Necessary Always Enabled

Performance cookies are used to understand and analyze the key performance indexes of the website which helps in delivering a better user experience for the visitors.

Analytical cookies are used to understand how visitors interact with the website. These cookies help provide information on metrics the number of visitors, bounce rate, traffic source, etc.

Advertisement cookies are used to provide visitors with relevant ads and marketing campaigns. These cookies track visitors across websites and collect information to provide customized ads.

Other uncategorized cookies are those that are being analyzed and have not been classified into a category as yet.